• An emphasis on succession and advanced training for EP: specialist retail

• comTeam gets started with the growr start-up network 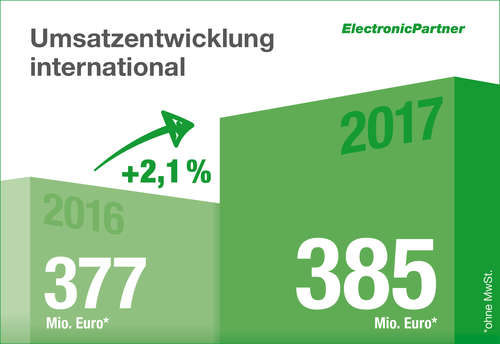 Düsseldorf, 23 February 2018 – With core sales of 1.695 billion euros in Germany and the European national organisations, ElectronicPartner concludes the 2017 financial year with an increase of 2.5 percent. Germany, the core market, is responsible for 1.310 billion euros, equivalent to an increase of 2.6 percent in comparison with the previous year. The Netherlands, Austria and Switzerland generated 385 million euros, improving by 2.1 percent with respect to 2016.

“In 2017, ElectronicPartner celebrated its 80th anniversary. Concluding our anniversary year with an increase in turnover is a great success for two reasons. First, many concepts in which we have invested in recent years are paying off – from the EP: quality campaign to the growr start-up network. In addition, the competitive environment has continued to intensify over the years. We are augmenting our experience and healthy corporate structure with innovative ideas to ensure successful performance – and we achieved it again”, says Karl Trautmann, ElectronicPartner Management Board member with regard to the result.

Development of the EP: brand

Although the specialist retail channel suffered another decrease of one percent in 2017 according to the GfK marketing research company, the EP: brand experienced new growth of 3.4 percent, which means that the success story of the quality campaign is continuing at a sustainable level. Market advancement will be maintained this year as well with new approaches to advanced training and company succession.

About 16 months after it started, the turnover of the online shop continues to increase in importance at MEDIMAX. The reservation function has established itself as a significant customer magnet. With a pick-up rate of over 50 per cent, it has created a bridge between the web and the PoS. “We’re celebrating MEDIMAXIMAL” is the motto for 2018 for the 130 locations of this retail chain in Germany. The brand’s 30th birthday is the focus of a strong consumer campaign to raise interest.

250 new partners at comTeam due to growr

In 2017, the comTeam technology network experienced successful economic development. In addition to a new marketing presence, the establishment of the growr start-up network was among the most significant milestones. Via this platform, the comTeam offers company founders assistance with all of the organisational issues in the start-up phase.

In addition to in-house brands, the partnerships of ElectronicPartner have experienced encouraging development. Above all, SH Telekommunikation Deutschland GmbH has established itself successfully as a service provider for the telecommunications business of the entire buying group and demonstrates energetic growth by reaching 500 million euros sales for the first time.

“The football World Cup and the 30th anniversary of MEDIMAX are just two positive influences on the 2018 financial year. Our three most important brands have sharpened their profiles – we’re ready to meet the challenges in our industry again. There are reasons for excitement in retail for 2018, such as the triumph of voice control and increasing interconnectivity”, predicts Karl Trautmann. 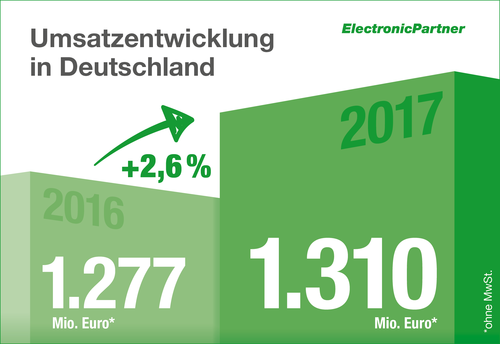